Tell the Flathead NF today to not issue Special Use Permits for irresponsible recreation! It only taks a couple minutes.

The Flathead has asked the public to comment on four Special Use Permits (SUPs), two of which are for trail-running races that have caused injury and/or death to runners and bears!

Here's what we wrote to the Flathead today. We urge you to consider making similar points in a quick email:

The Board of Review (BOR) reports on the death of Brad Treat when he slammed into a grizzly bear while mountain biking at high speed must be regarded as the best available science and expert advice for reducing surprise encounters between people and bears:

"Don’t Run - jogging in bear country increases the odds of surprise encounters at close distances and surprised bears are more likely to be aggressive.

- Do not issue the Whitefish Trails and Foys to Blacktail ultra-marathon SUPs. To do so amounts to a Forest Service endorsement of the commercial promotion of irresponsible behavior in bear habitat and runs contrary to the BOR recommendations that the Forest Service is party to. The public education intended by the BOR will essentially be nullified by the commercialization and expansiveness of the irresponsible behavior endorsed in such SUPs!

- Issue the Whitefish Shuttle and Guiding SUP only if the business is willing and required to abide by and distribute the BOR recommendations to its passengers and clients. These materials should be developed by the Forest Service and approved by the BOR, insuring that permittees are positive ambassadors for human-bear safety.

- We see no red flags for the more modest Journey to Wellness Program SUP, provided the permitted activities are indeed hikes and not trail running. This SUP offers another opportunity for the permittee to abide by and distribute the BOR recommendations.

To make it simple, send a single or the same email to these two email addresses:

Click here to read our full letter to the Flathead.

Click here to read the Flathead's invitation for public comments and background info.

Your quick email will help promote responsible recreation on our public lands and help avert 100- and 200-person trail running races that promote just the opposite!

Thanks for helping! Comments are due June 19!

Click here to read the Missoulian article on our efforts.

Click here to read the Missoula Current article on our efforts.

Our Winter-Spring 2019 newsletter reports on how the revised Flathead Forest Plan is ushering in lawlessness - and why we are suing over it!

It also reports on how collaboration and public-private partnerships are over-promoting recreational developments and activities of great risk to people and wildlife, using the southern Whitefish Range as just one example! 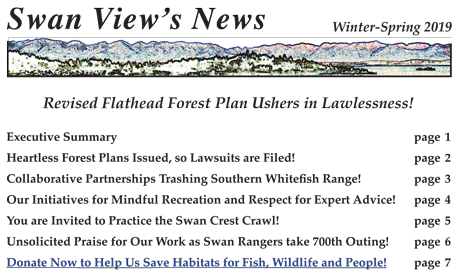 A big THANK YOU to those who have made donations that support our continuing work!

Won't you join them and DONATE NOW? 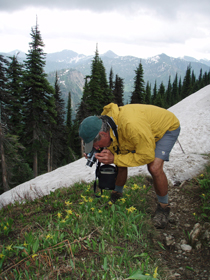 You are cordially invited to participate in the Swan Crest Crawl, a mindful practice to see how long you can take to hike 70 miles (the length of the Swan Crest from Inspiration Point near the Bob Marshall Wilderness to Columbia Mountain).

You can hike, walk or crawl the 70 miles wherever you wish, but you are encouraged to take your time and enjoy everything the outdoors has to offer:

- Sit in the shade by a mountain stream and listen to the songbirds.

- Look around for wildlife big and small. The outdoors is their only home.

- Walk slowly and talk to the wildlife that might be just around the corner in the trail so you don’t have a surprise encounter with a bear, mountain lion or mama moose! Keep your lightweight bear spray handy just in case.

- Keep an eye out for wildflowers and definitely stop to smell the wild roses.

- Bring along kids and elders, sharing enthusiasm and knowledge.

- Carry lots of heavy plant and bird ID books to help slow you down!

- Better yet, bring a bit of camping gear and spend a night or two under the stars!

The interactive map you’ll find there is also a great way to learn more about the natural and cultural history of the Swan Crest. And, it will get you thinking about even more ways to appreciate and spend time in the great outdoors wherever you are! 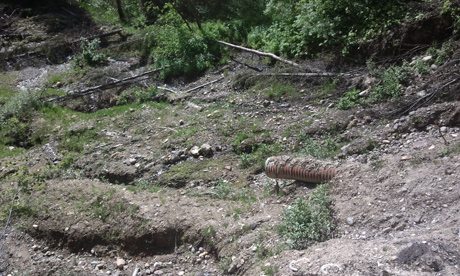 UPDATED 4/15/19: The government did not respond to our February 8 60-day notice so on April 15, 2019, Earthjustice filed a lawsuit on our behalf in U.S. District Court in Missoula, MT.

Click here to read the Missoulian article in this matter.

Swan View Coalition and Friends of the Wild Swan have filed a 60-day notice that they will file suit over the Flathead Forest Plan's abandonment of key protections for threatened grizzly bear and bull trout!

The photo above was taken by the Flathead National Forest of its logging road 10753. It considers this road so well "stored" and "impassable" to motor vehicles that it need not be counted as a road in total road density - as though it does not continue to impact fish and wildlife!

Mandatory limits on the road system that were in the prior Forest Plan's Amendment 19 have been fully abandoned in the revised Plan. The Flathead no longer has to decommission old logging roads and remove culverts in order to protect grizzly bears and bull trout, even though research shows bears are displaced by even closed roads and bull trout suffer from the sediment produced by roads.

The Flathead recently revealed what it thinks it can get away with under its revised Plan. Its Mid-Swan Landscape "Restoration" Project would build 60 miles of new permanent logging roads and an unspecified mileage of "temporary" logging roads! In contrast, under Amemendment 19, the Flathead built only 3.2 miles of new road since 1995.

Earthjustice has agreed to represent us in this matter!

Click here for our Notice of Intent to file suit.

Click here to read the Kalispell Daily Inter Lake's article in this matter.

Click here for good reasons to doubt the government's claims that grizzly bears are "recovered" in the Northern Continental Divide Ecosystem. 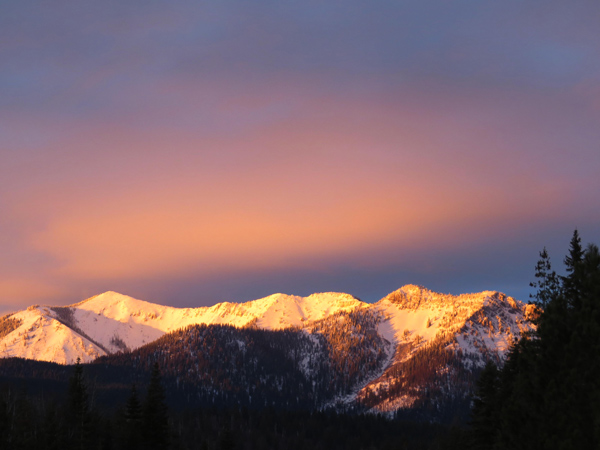 President Trump and the Flathead National Forest issued orders over the Holidays that will greatly increase the logging of public lands in the New Year!

As the sun sets on 2018, don't think for a moment that the government is shut down!

On December 21, Winter Solstice, Trump issued an Executive Order directing increased logging on Forest Service and Bureau of Land Management lands under the guise of controlling wildfires - even though hundreds of experts have warned logging will make matters worse. The EO instructs the agencies to use existing shortcuts in environmental reviews and to create new shortcuts. You can read or download the EO here or the warning letter from 200 scientists here.

Two days after Christmas, the Flathead National Forest published its Final Record of Decision for its revised Forest Plan. In the same Federal Register notice, the Forest Supervisors of the other Forests in the Northern Continental Divide Grizzly Bear Ecosystem issued Amendments to their Forest Plans. The Flathead Plan and other Plan Amendments all remove or greatly relax management standards that were in prior plans to protect the threatend grizzly bear and its habitats from road building and logging.

We wish we had better news to share, but we wanted to let you know that we aren't asleep at the switch even though the government may be pretending to be!

With you by our side we intend to meet these challenges head-on in 2019! Your continuted support of our work is greatly appreciated!

January 7 update: Click here to read a Hungry Horse New Article chastising the Flathead for not making the release of its revised Forest Plan known publicly. The article also notes that the current Forest Plan's road closure and decommissioning program for grizzly bear security, Amendment 19, had also restored water quality in Big Creek and gotten it removed from the list of "impaired" watersheds - but that Amendment 19 is abandoned in the revised Forest Plan! 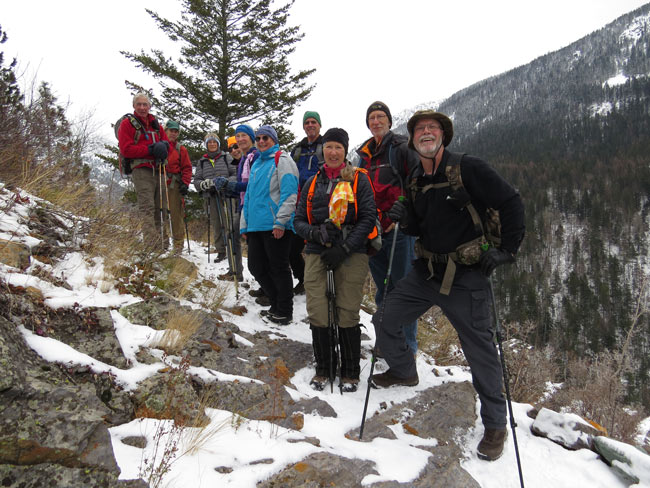 May you find yourself among friends and family and doing things you love!

Thank you for your kind words and support in 2018!

Holiday Newsletter: Temporary Win for Grizzlies but More Work Ahead!

Our Holiday 2018 newsletter reports on a temporary legal victory for grizzly bears, but how agencies remain committed to removing their ESA protections in the greater Yellowstone and Glacier ecosystems!

To make matters worse, the revised Flathead Forest Plan is due to be issued by Christmas. It would strip existing protections from grizzly bear habitat regardless of whether ESA protections are lifted - unless we stop it!

So please join others in supporting our work to protect habitats for wildlife, fish and people! 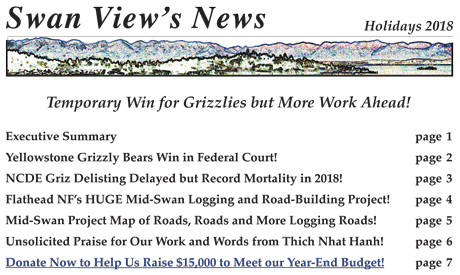 A big THANK YOU to those who made donations matched by Cinnabar Foundation!

Won't you join them and DONATE NOW to help us meet our year-end budget?

The Court's recent restoration of ESA protection to the Yellowstone grizzly bears does not stop the planned removal of those protections in the Glacier/NCDE area!

We need your help to continue fighting delisting of the NCDE grizzly bears, including at this week's hearings in Missoula and Kalispell!

While the Court in the Yellowstone case just gave government agencies good advice on how NOT to proceed in the NCDE delisting process, that doesn't mean the agencies will heed it.

It is important that you show up at hearings, send in comments and send letters to newspaper editors saying you want continued ESA protections for grizzly bears!

The Yellowstone Court ruling supports our position on the NCDE, so please revisit our Action Alert and provide comments to MDFWP this week!